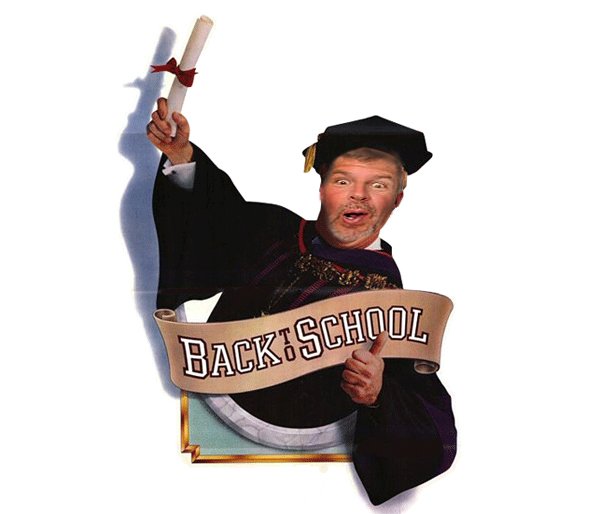 I love the movie Napoleon Dynamite (I’m from Idaho…all 1.68 million of us like it). It just makes me feel excited about going back to school. After the opening credits, Napoleon quietly awaits the school bus on his first day of school. After getting on the school bus another kid asks, “What are you going to do today, Napoleon?”

Napoleon shoots back, “Whatever I feel like I wanna do. Gosh!”

You just can’t beat original and genuine dialog like that. Not to mention the muscleman action figure tied to a string that Napoleon throws out the school bus window and drags along the road.

Later he goes to the office and calls his brother who just happens to be “chatting with babes” to bring him some chap stick because his lips “hurt real bad.” Of course his brother can’t bring him any and Napoleon is deeply troubled by this.

Too bad their school does not have Nurse Kevin; he’s always got something to put on the kiddo’s lips when they get dry and chapped.

Being a school nurse is great. This is my third year and I am excited about to go back to school. Well, let’s be completely honest; I could use one more day. And, if you ask me tomorrow, I’ll say the same thing, “I am excited but I could use one more day.” This year we are suppose to start back on Wednesday, August 16, 2017 but I am going back on the 15th to help with registration. Today is the official last day of summer for me.

The school year has to start. If there was no school year, I’d have to find another job. But, for me, there is no other nursing job. This is the only nursing job I will ever have again and I have made preparations for that to be a life-long fact. They implied a “Florence Nightingale” work place when I was in nursing school (1994-1998). After my first job, I realized that it was more like Office Space (movie).

“Hello Peter what’s happening. I’m gonna need you to go ahead and come in tomorrow. So if you could be here at around….nine that’d be great.” – Bill Lumbergh

I had been working hospice and had been for years and years. But, I got worn out over helping folks die from diseases that many were caused from a chosen life-style. What I needed in my career was a chance to help people know what they were getting into before they…well…got into it.

Brownfield Station (or Mötley Crüe for my generation) knows better:

“Smokin’ in the boys’ room

Smokin’ in the boys’ room

Now, teacher, don’t you fill me up with your rules

But everybody knows that smokin’ ain’t allowed in school”

Speaking of Mötley Crüe … I was at a record store back in the 80’s and picked up a Mötley Crüe LP. My younger buddy says, “Woa! Those girls are hot!” I had to correct him, “Those ‘girls” are dudes.” Needless to say, when we got home, he washed his mouth out with soap. If you’re from the 80’s, you’ll get that.

Smoking does cause illness;  we all know this but still 17% of Americans smoke. What if there’s one child this school year that is thinking about smoking and, after coming to see Nurse Kevin for his “dry lips,” the smoking subject comes up and I get an opportunity to influence his or her decision regarding smoking. Do you see how POWERFUL that is?! Maybe that one little person will grow up healthier, richer and die from natural causes rather than living his or her last 6 months on the receiving end of a nasal cannula pumping out 2l/min of oxygen all the while wishing for more (nurses will get that).

Last year I had a conversation with a mother regarding the options for hydration she was offering her child. This little boy often visited Nurse Kevin for vomiting and other GI issues. “I give him Red Dew (Version of Mountain Dew a carbonated soft drink brand produced and owned by PepsiCo) because that’s all he’ll drink.” Repeating any of the dialog that followed can easily be imagined. The point is: maybe I will have the chance this year to continue to influence both the child and his mother to help this child from not being one of the 68.8% of adults that are considered to be overweight or obese. Maybe he too will live a long and healthy life and not die from diabetes, heart failure and a 100 other illness associated from being chubby.

There will be 100’s of little 5th grade boys that will find out why they are starting to smell bad this year from Nurse Kevin. They may not get the whole birds-and-the-bees story (we are kinda limited on what we can talk about), but they will definitely know the inner workings of their boy-parts and why this or that happens. They will giggle and laugh and yet soak it all up like a dry sponge on a wet counter top. It’ll get loud and they will ask questions that not even Nurse Kevin is prepared to answer, but they will walk out and remember that 2-hour session clearly for the rest of their lives. This year I will have my son in one of these classes. He tells me he is already dreading it…deep down…they all look forward to it. I mean it’s the birds-and-the-bees talk. Everyone wants to know how that works.

“If you smell yourself today, someone else did three days ago.” – Nurse Kevin

The summer sure did go by fast. I got a lot done and yet, for some reason, I am fretting over the stuff I didn’t get done. Needless to say, as a nurse…I am glad to have had all the time off to “not to get anything done.” This school year will be awesome! Just like last year and the year before that. And, in 296 days, summer break will be here once again!!