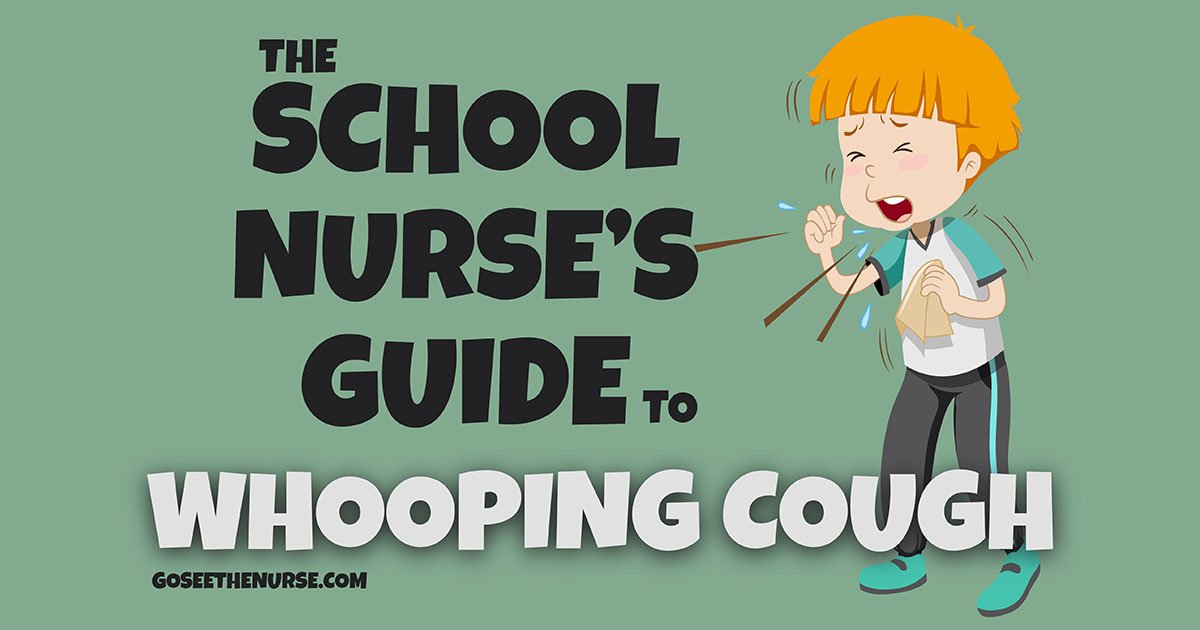 The end of the school day is one of my favorite times of the day. No, not (just) because it’s close to time to leave and get home. I just love watching all the young-uns leaving with their backpacks, shouting, “See you tomorrow, Nurse Kevin!” as they wave vigorously in an attempt to catch eye contact and know their “farewell” was received.

The other day, my series of “see you later, buddy” and “have a good afternoon, little girl” was interrupted by a not-unwelcome question, “Nurse Kevin, what do you know about whooping cough?”

“Is the child vaccinated against pertussis?” I asked while I prayed the child they were referring to was not a member of the small army of children leaving my school house at this very moment.

“No, actually, it’s my husband; he’s been sick with this for weeks, and they only recently found out it was whooping cough. And now my 10-year-old son is sick with it (poor child…and husband…AND poor school nurse at the other district).

“Was he vaccinated against it?” I asked.

Before even getting the question mark out on my question I received an implicit, “Yes! He’s been sick with it now for weeks. And it took them (the clinic) weeks to finally check for it. When my son got sick, I told them ‘No! You check and treat for this right now; don’t wait.’.”

Maybe my weak explanation as to why the doctors waited to check her husband for whooping cough and why we, as medical persons, usually practice our trade unknowingly under the influence of the philosophy of Occam’s Razor was a stalling tactic for the fact that I really don’t know the essence of what whooping cough really is. Yes, I know that it’s a bacterial infection that gets into your body through your nose and throat (or by touching your face with unwashed hands carrying the bacteria). I know that it will very easily spread from person to person. And I do know that vaccines can help prevent it in children (and even adults).

We school nurses are aware of the “whooping-like sound” the sufferer makes as they try to breath in after a dry coughing spell that could go on for over a minute (a long time to breathe out without breathing in).

Symptoms like coughing, nasal congestion, runny nose, sneezing, and feeling fatigued, as well as having a fever, are all telltale signs of whooping cough…but also of the flu and the common cold, as well as allergies to pollen and smoke. Most of us…and school nurses…will not jump to “whooping cough” as being the culprit for these symptoms. Here in Southwestern Idaho, with all the smoke we have during this time of the year, I’d likely “write it off” as “allergies or respiratory irritation from all the smoke in the air,” especially for my children who are vaccinated.

After my encounter with this mamma I began to ponder her question, “Nurse Kevin, what do you know about whooping cough?” So, I got to diggin’…

What Is Whooping Cough

Whooping cough is a very contagious respiratory illness caused by a bacteria called Bordetella pertussis (gram-negative, aerobic, pathogenic, encapsulated coccobacillus). These little bacteria dudes lock on to the cilia in the upper airway and cause havoc as they live, metabolize, die, and then excrete a toxin that damages the lining of the airway and causes it to swell, thereby constricting the airway. This bacteria is not found in any other living thing other than in us humans.

We need those cilia. Cilia are like little fingers working along the airway, working in sort of a rhythmic waving motion that helps “move” dirt, debris, and other junk that is breathed toward mucus that “catches” these particles like a mouse in sticky trap (http://www.ciliopathyalliance.org/cilia/structure-and-function-of-cilia.html). Then we clear our throats with a slight mini-cough and then…well…you know the rest.

The pertussis vaccine was developed in late 1920s and early 1930s and has saved millions of lives! Before the vaccine was created, complications from whooping cough killed between 10,000 and 20,000 people per year…and that was only in the U.S. Consider that the population density was much less in 1930 (U.S. population was about 122,775,046 people compared to 326,766,748-ish in people in 2018). Information provided by The World Health Organization (WHO) (http://www.who.int/biologicals/publications/trs/areas/vaccines/whole_cell_pertussis/Annex 6 whole cell pertussis.pdf) reported that there were 18,351,000 cases of whooping cough in 2002 all over the world (WHO Technical Report Series No 941, 2007). That’s the bad news. The really bad news is that about 294,000 of those infected died. The document also suggested that “global vaccination against pertussis averted more than 37 million cases and 587,000 deaths.”

There are two types of vaccine for pertussis (https://www.aap.org/en-us/about-the-aap/aap-press-room/Pages/Whole-Cell-Versus-Vs-Acellular-Pertussis-Vaccine-Affects-Disease-Risk.aspx):

The whole-cell pertussis vaccine (wP) was used in the U.S. up to about the mid to late 1990s. I have read research that the wP is more effective than the combined acellular version given today (DTaP). I have also heard that the wP has more side effects than the aP version. I will only assume that the change to a less-effective vaccine is due to the hope that more people will get vaccinated due to the fewer incidents of the vaccinated experiencing “right-now sickness” side effects, versus the “I may or may not get sick later” rationale of the unvaccinated. But this is only a hypothesis of mine. (https://www.aap.org/en-us/about-the-aap/aap-press-room/Pages/Whole-Cell-Versus-Vs-Acellular-Pertussis-Vaccine-Affects-Disease-Risk.aspx)

Regardless, the combined acelluar pertussis (aP) has an efficacy of about 70% and much higher with subsequent vaccinations. I’ve heard the immunity will wane over time. But this is (somewhat) okay. It’s the young children that are most susceptible to the effects of the infection.

The CDC recommends the following Immunization for Pertussis Schedule:
2 months
4 months
6 months
15-18 months
4-6 years
11-12 years
And then every 10 years throughout adulthood.

Pregnant women should be vaccinated during the third trimester to help protect the baby.

Inactivated whole-cell vaccines. These vaccines are made from microorganisms (viruses, bacteria, other) that have been killed and, when injected into the body, will cause an immune response that prepares the body from whooping cough if the person is ever exposed for real. (http://vaccine-safety-training.org/inactivated-whole-cell-vaccines.html)

Combined acelluar pertussis is made from highly purified components of pertussis bacteria. Basically, these components are “parts” of the bacteria that are purified (antigens) that can trigger an immune response.

Even if someone has had the pertussis vaccine, they can still become infected. The vaccine does not confer lifelong protection. Even so, persons who suffered through an illness of whooping cough will experience a waning “immunity” to future episodes of infection.

How Does Whooping Cough Spread?

I tell my children, “Don’t touch your face!” The bacteria may be on a surface that was touched by someone who was infected. What do people do with runny noses 7 surfaceoe whop64,R0lGODlh R0lGOniwP)