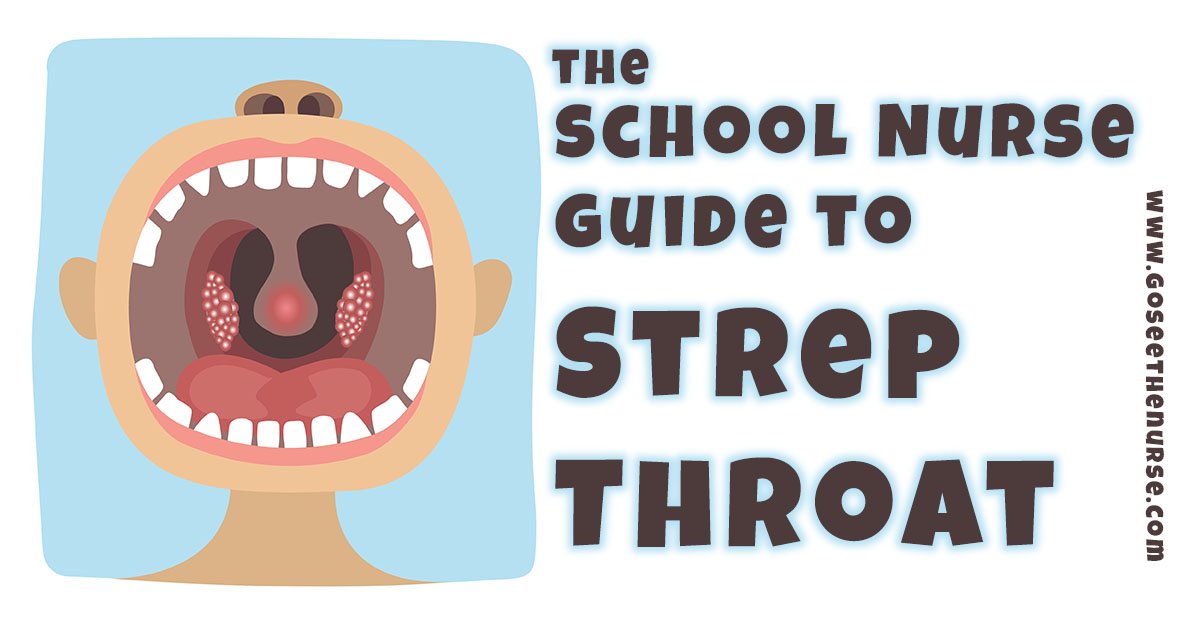 The School Nurse’s Guide to GAS

I wanted to call this article “The School Nurse’s Guide to GAS.” But, I thought that if someone was really looking (and being serious) about strep throat that “GAS” wouldn’t be a term that would draw a school nurse to an article on Strep Throat. “GAS,” or group A streptococci, which causes bacterial pharyngitis — also known as strep throat — is what we’ll be talking about…and some other stuff, too.

My Pops, my grandfather, was a hoot. When I was in early elementary school, and I’d get a sore throat, he’d say, “Kevin, you been smooching girls again?” Then I’d get all red-faced, “Oh Pops! That’s gross!” Truth be known, I don’t think I ever had strep throat in my whole life. Even before I became a nurse, I had the curse of having a keen understanding of cooties and how those little dudes spread all around (I am a grade-A germaphobe who still doesn’t wear shoes in my house). Having a mother as a nurse probably had a role in that…but…anyway, let’s do some talking about strep throat…and keep reading…we’ll also discuss scarlet fever. Yes, if the child has strep throat, there’s a chance that they will develop scarlet fever and rheumatic fever…and rheumatic fever (did you know that rheumatic fever is NOT an illness?).

What Is Strep Throat

How Does Strep Throat Spread

We all have nice, moist throats to allow these aerotolerant, non-motile and non-sporing cocci to “do their thing.” And through this moist and juicy area of our bodies, a lot of forceful air moves…in and out…with respiratory droplets being “spat” this way and that even while just talking. These bacteria find their way into another’s moist throat either by their breathing in the droplets; touching something that has the bacteria and then touching their mouth, nose, or eyes; drinking after someone (water fountains); kissing (No, Pops! Not me!), or a number of other ways.

People who are contagious with strep throat may not even be sick or show symptoms of illness.

A young-un shows up with sore throat that wasn’t there when they got to school a few hours ago (starts quickly), they complain of painful swallowing, they have a fever plus red and swollen tonsils with white patches or lines of pus-like residue (gross!), they have red spots on the roof of their mouth, and/or even swollen lymph nodes on the front of their neck. All or many of these symptoms may indicate you have a child with strep throat.

Red spots on the roof of the mouth

Swollen lymph nodes on the front of the neck

A child with a sore throat, cough, runny nose, and hoarse voice may have a viral infection and not strep throat. It may just be a cold. If the child shows up with a sore throat along with a runny nose, sniffling and sneezing, headache, coughing, and body aches, as well as a fever, the infection may be viral (with “maybe” being the key word).

Symptoms that may indicate the sore throat is viral (may):

Runny nose (though you may see a thick nasal discharge with strep throat in younger children).

In order to get a diagnosis for strep throat, a rapid strep test (RADT) or a throat culture is required. Strep throat is cured with antibiotic therapy. Most sore throats are caused by a viral infection. As a matter of fact, about 60%-80% of all bonafide sore throats (infection) are caused by a virus in relation to our school children. When our fellow teachers (adults) have a throat infection, then it’ll be viral about 85%-95% of the time. And we all know that antibiotics for viruses is like trying to give a shot with the backside of a syringe; it just ain’t gonna work. So, it’s important to know what’s causing the sore throat and other symptoms before deciding on a treatment plan of care (not that we school nurses are often involved in this process, but parents and even the older students would like to know). One RADT is called the Lateral Flow Test. It kinda uses the same principles as a home pregnancy test…but…well…is way different, too.

A sample of mucus is obtained by a throat swab. The sample is placed on a device that draws the sample in to the test line and to be compared to the control line (like a 2-line pregnancy test). If one line shows up, the culprit is not bacterial. If two lines show up, then the child has strep throat.  Now treatment can follow.

Talk about a one-two punch: The group A streptococcus bacteria that causes strep throat also causes scarlet fever. During the course of the illness, a scarlet-colored rash may form on the body as well as red creases in the armpits, elbows, and knees. These red creases are called Pastia’s lines. Pastia lines (also called Pastia’s sign or Thompson’s sign) are when non-blanching pink or red lines form in skin creases. The scarlet-color rash, also known as a “strep rash” can form from poorly or untreated strep throat. You don’t hear about scarlet fever much anymore. Yes, the term is still heard now and again, but because of the ease in testing for strep throat, prompts diagnosis and the expeditious initiation of antibiotic therapy, many of the complications from strep throat are seen much less frequently than 40-50 years ago.

Where you really run into some problems is the development of rheumatic fever secondary to inadequately treated strep throat.  Rheumatic fever is actually not a fever; it’s not even an infection. Rheumatic fever is actually an inflammation secondary to the body’s attempt to kick the streptococcus bacteria out of the body. The antibodies that our body sends out to attack and kill the invading bacteria actually attack our joints and heart. When our heart is “attacked,” the heart valves will become inflamed and swell up. This swelling can cause the heart valves to scar and no longer function as they were designed. Again, this is mainly found in poorly or untreated strep cases.

Truth be known, strep throat is a self-limiting infection. If you do nothing about the illness, it should, likely (maybe) resolve under the body’s normal cootie-fighting systems (remember those cool cootie-killing antibodies that our bodies send out?). But, that may not be the best idea. We’ve already talked about the risk of scarlet fever and the heart valve-damaging rheumatic fever. These two conditions are rare here in the USA because of better diagnosis and antibiotics. It sure ain’t because we’re healthier in general.

How Can The School Nurse Control The Spread of Strep Throat?

We’ve heard it a thousand times and will hear it a thousand times over: handwashing is a major factor in controlling strep throat. But, with that being said, the school nurse is the pivotal point in controlling the spread of strep throat in a school house. Though we school nurses can’t diagnose anything beyond the privileges of nursing diagnoses, we know what ducks look like, sound like, and walk like…and we don’t need a zoologist.

Likewise, if there’s a sore throat that has persisted for a day or so, and especially if there is a rash, encourage the parents or guardians to seek medical advice. But, like every call where your good school nurse judgement says, “Go see a doctor,” be sure to “word” the request in such a way to where you are not committing your school (even unknowingly) to a hospital / ER / urgent care / PCP bill. “Ms. So-And-So, I’ve noticed that your child has had a severe sore throat for the past 24 hours, if he were my child, I would take him in to be evaluated due to the strep throat-like symptoms.”

Sore throats with a cough and a runny nose are likely not strep throat. There’s just a small chance that the doctor / NP / PA will order antibiotics or even test for strep throat. Even a persistent sore throat where coughing, sneezing, and a runny nose is present, it’s likely to be viral in nature. A call home is perfectly A-OK. But, use your nursey-senses. Sometimes you identify symptoms that you strongly feel warrant physician intervention.

To Exclude or Not to Exclude? That Is the Question!

If the child has symptoms of strep throat, they need to go home (and to the doctor).

If the child has been diagnosed with strep throat, they need to be excluded. And they need to remain excluded until 24 hours has passed from first dose of antibiotics. Keep in mind that going to the doctor at 8 a.m. on a Monday and getting the antibiotics at 10 a.m. and first-dosing at 10:30 a.m. does not “okay” the child for school the next morning at 8 a.m.

Children who have been on antibiotic therapy for 24 hours will not pass the bacteria to others.

Regardless of antibiotic dosing time, if the child is just so sick that they can not effectively participate in learning, then they need to be excluded.

If you nursey-senses tell you that the child’s condition may compromise the child’s safety or the safety of the other children, this child needs to be excluded (regardless of the “rules”).

I respect other folks’ beliefs. And some of the children live in households where the belief systems do not allow for medical intervention. There are parents who prefer to allow the illness to run its course “to help make their child’s immune system strong.” Either way, children with strep throat or strep throat-like symptoms without antibiotic therapy intervention need to stay home until the illness has resolved.

Well, that’s about it. That’s all I know…unless you know more. And, after you share what you know in the comments below, WE’LL ALL KNOW! Share away. Even if you think what you know is common knowledge…SHARE AWAY!

Be one of the LUCKY ones who are getting the updates from Go See The Nurse!  Start getting (non-spammy) updates from Nurse Kevin!

21 Reasons NOT to Wear Shoes in the House! 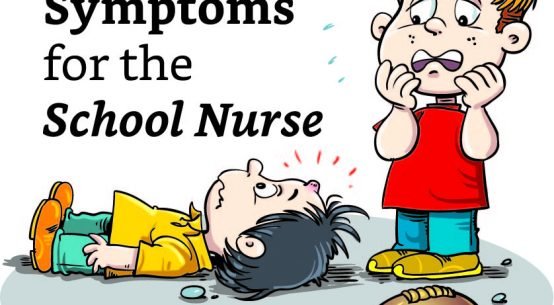